I read a lot of good books this year. Participation in Seattle Library’s “Summer Book Bingo” helped me not only diversify my reading list, but helped me reach a whopping 47 books read this year. I set a goal of 33 and crushed it, even taking November off for NaNoWriMo.

So… here is what I’ve read, with a few descriptions of my favorites. 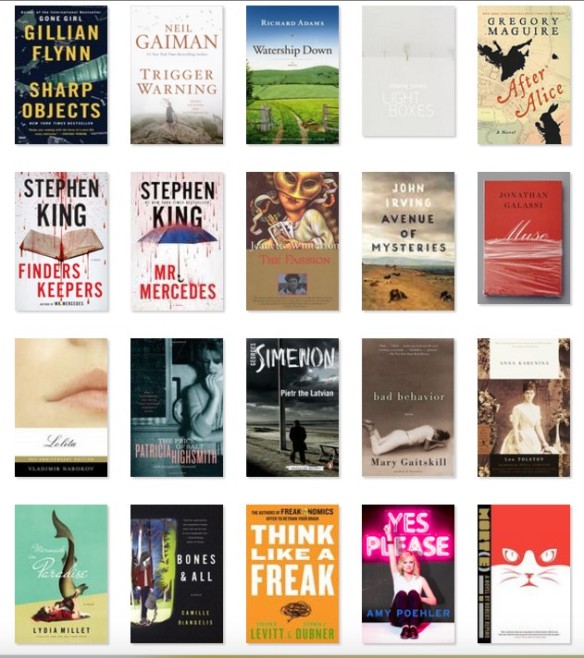 I absolutely hated Gillian Flynn’s utterly predictable Sharp Objects. I had the entire thing figured out at page 18. No lie. I circled it. Anyway, both of Stephen King’s available novels in the Bill Hodges Trilogy are a lot of fun. If you are not a fan of Mr. King’s gorey, scary horror novels, then maybe give these a try. These two novels (and a third to be released 2016) follow Detective Hodges the first, in search of a mass murderer who uses a Mercedes as his weapon, and the second is a cat and mouse game centering around a famous novelists lost, handwritten manuscripts. A lot of fun for a book nerd like myself.

Richard Adam’s Watership Down should be required reading. My only memory of it was the grizzly yet completely awesome cartoon. It scared the shit out of a generation. And rightly so. The novel is an allegory of war, and it was written for children. Who else should we teach the horrors of what war can bring? But, you know… in the form of adorable yet frightening bunny rabbits. It’s masterfully written, and beautiful, and go read it. Another novel about animals at war is the wonderfully weird MORT(e), by Robert Repino. See, the ants have taken over and declared war on the humans. They’ve enlisted the animals giving them the power to speak by helping them evolve. I know. It’s crazy. But it’s about a TALKING WARRIOR KITTY.

Gregory Maguire’s “After Alice” was wonderful. I wrote an email to him telling him so, and to my surprise, he responded. He was funny and gracious. His book is full of new characters and familiar friends from Wonderland. He seamlessly infuses reality with Wonderland. Along those lines we have the always delightful Jeanette Winterson and her novel about Napoleon and his love for chicken – The Passion. It’s so funny!

Amy Poehler’s Yes Please, is great. Do it as an audiobook for extra hilarity and extra celebrity cameos. Think Like a Freak is also an excellent choice for audiobook. Chop some onions and learn why David Lee Roth really demanded no green m&m’s in his dressing room.

Ok. I gotta speed this up…

My favorite book of the whole year was Anna Karenina. I read it in 24 days. Amazing. Lolita was also incredible and hilarious and so well written I had to put it down a few times. The short stories in both Trigger Warning and Bad Behavior were dark and creepy and scary… but for completely different reasons. The Muse and The Price of Salt were suburb (the later was the inspiration for Nabokov’s Lolita) and The Detective Magritte Mysteries by George Simenon are oodles of fun which you can devour in one sitting. John Irving (i love you) is back with some familiar themes in Avenue of Mysteries. I liked it, but if it’s gonna be your first outting with Mr. Irving, choose an older title. He’s way better than this book. 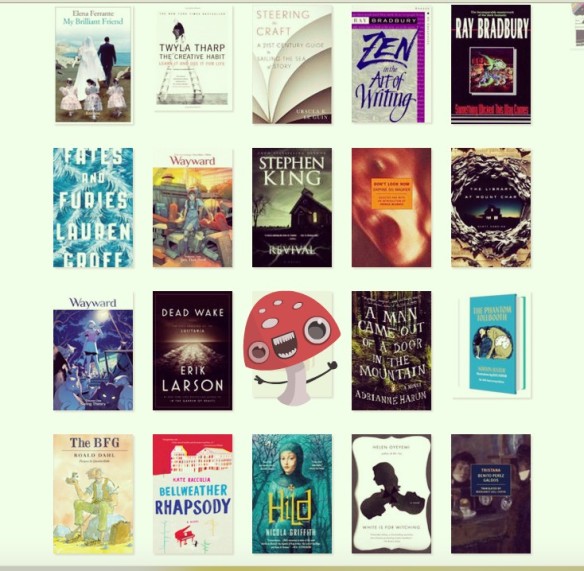 Okay… Elena Ferrante and her pastel colored, Neapolitan Novels: My Brilliant Friend, The Story of a New Name, Those Who Leave and Those Who Stay, The Story of a Lost Child. As I write this I am  pages away from completing Book Three. I could write 1,000 words or more on these books, but I’ll attempt to be brief. The vulgarly colored covers are a lie. A lie which is only revealed in the reading of the books. I wish I could convince more men to read these because they are full of politics and violence. Love and revenge and hate and war. Yes, it centers around the “friendship” of two females, but this book is not about two women who get cocktails and talk about men. These are more Joyce Carol Oates than Bridget Jones Diary. Anyway… go out and get them. And get all of them because you’ll finish the first one and be really, really mad if you don’t have that next book handy. So good!

Twyla Tharp: The Creative Habit, Steering the Craft by Ursula K. LeGuin, and Zen and the Art of Writing by Ray Bradbury are seriously fantastic and should be a part of any creative person’s library. They each attack creativity in a different and compelling way. Also by the great Mr. Bradbury, Something Wicked This Way Comes. Oh my gosh! It’s so good! So scary! The witch scene was particularly spooky. If you enjoyed the film, read the book. Also scary, more so even, was Don’t Look Now by Daphne Du Maurier. This collection of stories is thrilling, chilling and absorbing. Aside from the title story, the best is The Birds, from which the Hitchcock film was very loosely based. The story is far more frightening. The Turn of the Screw and Revival were also pretty terrifying. In a good way.

Erik Larson’s Dead Wake, about the sinking of the Lusitania, is eye opening and riveting. All of his books are.

I can’t say enough about Lauren Groff’s superbly written Fates and Furies. For this bookseller, it was far and away the best book (new 2015) I read this year. It played with style and language. It didn’t spoon feed anything to the reader. (Take note, Gillian Flynn.) And it was both touching and funny. The first half of the book is told by The Fates, the second by The Furies. They tell the story of one marriage from two perspectives. It’s perfect. If I could ever write a book even half as good as this one, I’ll die happy. Well done, Miss Groff!

And finishing out the list… the prolific and insanely good, Joyce Carol Oates wrote The Sacrifice – a retelling of the Tawana Brawley case. And oh boy, does she go for it. If you don’t know what that is: Google it. I’ll wait. The racial climate hasn’t changed that much, and she shines a light on all of the ugliness – on both sides. It’s an intriguing read. If you want to laugh your ass off pick up Nora Ephron’s I Feel Bad About My Neck, and Ron Koetrge’s book of Flash Fiction, Sex World.

Lastly, I encourage everyone to read The Book of Strange New Things, by Michel Faber. All of his novels are incredible and very different from one another. He wrote Crimson Petal and the White (SO GREAT!) and Under the Skin (SO WEIRD!) He’s an incredibly talented writer, and sadly he says this would be his final book. If that’s true, he left us with a masterpiece. It’s about a man who travels to a distant planet to spread The Gospel to the “aliens” who live there. He has to leave his beloved wife and their cat. The book is about love and loss and distance and peace. It’s beautiful.

So there you have it. The best of what I read this year. And just because I don’t mention a title doesn’t mean it wasn’t good. I just don’t have all the time in the world for book reviews. I gotta read! And, I’ll have you note that my booklist was unintentionally diverse. I don’t choose books based on what the writer looks like, where they were born, or what their sexual preference is. I just read. That being said I read books from authors hailing from The Netherlands, Belgium, America, Russia, the UK and more. I read books by women and men, and I read graphic novels, nonfiction, and kids books. I covered everything.

And it was good.