This is the most honest artwork I’ve ever seen.

Every month I am honored to be a contributor over at gumshoeblog.org – It’s a fun place. “Gumshoe features a collection of writers who are full of curiosity and are armed with an adventurous spirit. A gumshoe is a cultural curator who is looking for what is unexpected, beautiful, frustrating, and inspiring. A gumshoe digs deeper to attempt to understand how art and culture live and interact in our world. Gumshoes love the act of discovery and sharing.” Rad, huh?

So, this month we writers were tasked to make a map… of anything. I was a little dumfounded at the idea because I never like to put effort into anything that I believe will end up being ordinary. If I make a map I want it to be spectacular! So after ditching a few maps to fantasy realms, I decided to make a “map” of my life… with drawings.

I started in So. Cal and then moved to San Francisco. From there I moved to Oakland, and then back to L.A. for a few months before moving to Prague. I stayed in Prague for about three years before moving to Mexico where it was ridiculously hot and I got paid very little. So… back to Prague for another four years. When I got tired of the Czech lifestyle, I moved with my partner to Texas, his home. We lived in Houston and Austin, but mostly Austin. I did not care for Texas. We left Texas in January of this year and packed our little car with everything we own. What didn’t fit didn’t come. (Now that’s a minimalist lifestyle!) We drove to Ratna Ling Buddhist Retreat Center. (I wrote a series of pieces about my time there. This was the last one) It was supposed to be a six month commitment, but they asked me to leave after one month. From there we drove back to Berkeley where we stayed with an awesome couple, their one year old and three legged dog. They were kind enough to let us stay and recoup before we repacked the car and headed to Seattle. And that’s where I am now.

I love kitschy Roadside Attractions. I’ve seen World’s tallest thermometer in Baker, and I’ve driven through the giant Redwood in Nor Cal. Since I’ve been in Texas all I have really wanted to do was see the Big Heads, and yesterday I did.

My fella and I were leaving Pop Shop Houston – a tiny little festival devoted to DIY, handmade, and vintage stuff. It was kind of cool, but kind of not. Most of the stuff there was over priced, and there was only one functioning food truck while we were there, and no seating. 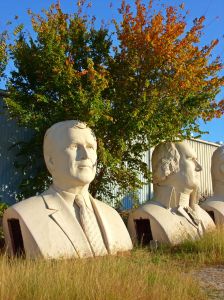 While some of the goods offered were quality and intriguing, a lot were not. I was a little disappointed. You could walk around and shop for free, or pay $10 for VIP ticket. That got you a gift bag, hipster beer (Pabst or Lonestar) and time in the arcade – all while supplies last. Kind of lame. If you must offer a paid ticket, at least make it worth it. Offer me discounts on vendors and food. Then it will be worth my while to pay $10 for something that is already free.

We ended up going to a nearby taqueria and then heading out. We made a wrong turn and found the Big Heads. I was elated. I have been wanting to see these sine we moved to Texas over a year ago. Screw The Alamo, I want to see the Big Heads! And there they were – hiding next to a Target and Washington Ave.

Houston artist David Adickes has made not only huge president heads, but also all four Beatles – reaching heights of 36 feet and weighing about 7,000 pounds. He said he liked them because they were just basically creative guys. I had no idea I was going to see The Beatles and the Big Heads. I don’t really care about The Beatles, but the statues were badass. 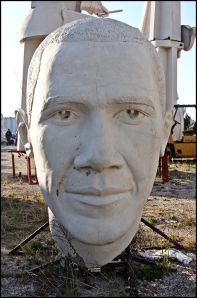 Adickes created seven-foot tall busts of the 43 Presidents for display in parks in South Dakota and Virginia. Although heads are moved around, and some are missing (Notable missing heads: Kennedy,Reagan, Nixon), we started at George Washington and worked our way to Barrack Obama. It was surreal to watch other visitors walk around, and climb on Andrew Jackson and Hoover, loudly proclaiming their ignorance. “I don’t know who any of these are! Is that bad?” Yes. Yes it is.

Andrew Jackson looks like he stepped out of a larger-than-life $20 bill, and bore more than a little resemblance to Beethoven. G. W. Bush had on a snappy tie featuring very detailed Republican Elephants.  It was rumored that busts of Sam Houston and “Father of Texas” Stephen F. Austin were hanging around, but don’t know what they look like. Maybe I saw him and thought he was Grant. It’s possible. 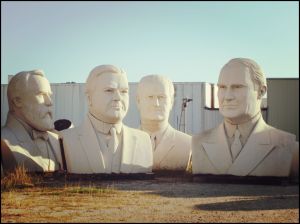 I can now say I’ve seen the Big Heads in Texas. It was a fun excursion for an amateur photographer like myself, and I learned a little bit about the Houston art scene beyond the museums on offer in the city. The museums here are great, but it was really fun to find this free, public space with amazing public art. 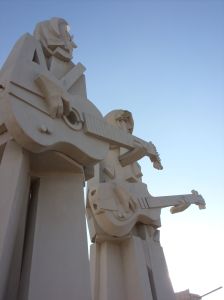 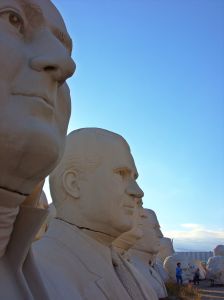 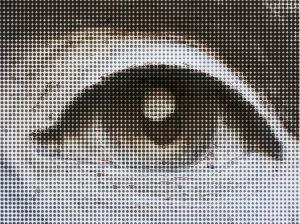 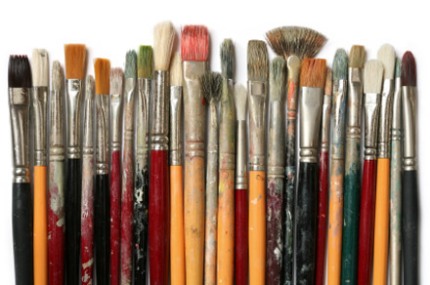 Pablo Picasso said, “Every child is an artist, the problem is staying an artist when you grow up”. Sometimes “being creative” sounds like a task or chore, like the dishes or laundry. Sometimes artistic expression and life itself feel like they are at odds with each other. We juggle work, life, relationships, hobbies; and often our pursuit of a creative life gets shoved aside. The trick is to make creativity part of your daily life. Like Picasso said, kids are all artists. They make art every day and they don’t judge their work. They are just naturally creative. But so are you. Here’s how to rekindle that creative side and keep the proverbial fire stoked.